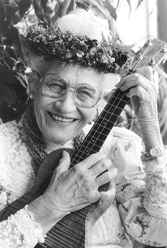 Like the episodes in a novel, the storied life of Aunty Irmgard reveals a woman who understood the power of song to capture the profound beauty of her world. She pulled just the right notes from the air, giving voice to stories, memories and feelings that would otherwise be lost or forgotten. The songs featured in this year’s Song Contest are like entries in a journal—they are postcards that recount the highlights of a musical journey for all to enjoy.

It is with great honor and privilege that the students of Kamehameha Schools Kapālama lift their voices in tribute to one of Hawai‘i’s most beloved and prolific composers. Join us now as we embark on an incredible adventure of story and song celebrating Aunty Irmgard Farden Aluli: A Musical Journey.

From the lofty plateau of Ka'ala down to the sacred birthing stones of Kūkaniloko, from the circuitous estuaries of Pu'uloa home of the shark guardian Ka'ahupāhau, to the towering coconut grove of royal Helumoa—the sweep of O'ahu's breathtaking and bountiful landscape is legendary. In the spirit of this year's theme of classics, tonight's Hō'ike will celebrate O'ahu and the classical time-honored ways in which its esteem has been celebrated through mele and mo'olelo.


The Song Contest is unique to Kamehameha—a tradition that has involved all students in musical competition for ninety years. Miss Laura Brown, Director of Music at Kamehameha 1926–1947, stated that "the objectives of the song contest are to build up the repertoire of the best in Hawaiian music for the cultural heritage of any student who attends Kamehameha; to develop leadership, cooperation and good class spirit; and to give students the use of their singing voices and to give them pleasure in singing as a means of expression."