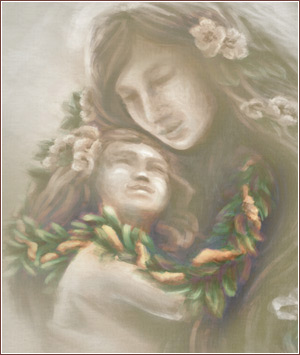 The words lei (garland) and pua (flower), can poetically refer to children. Although Pauahi did not have keiki of her own, her aloha and concern for her people moved her to create the Kamehameha Schools for the children of the Lāhui Hawai‘i, her Native Hawaiian people. Tonight, as we look to the future, as Pauahi did over 125 years ago, we focus on the youth.

The songs that will be heard this evening reflect the deep aloha that mākua and kūpuna -- parent and grandparent generations -- have for their pua. Just as a child clings to its mother, so too does a beloved lei adorn the wearer. Each of this year’s song contest mele was composed as a loving makana for a child. Some are well known while others are making their debut. Like Pauahi’s never ending aloha for her people, these beautiful mele continue to express the composer’s love, hopes and dreams for a precious child. Please enjoy the 93rd annual Kamehameha Schools Song Contest, featuring the theme He Lei Poina ‘Ole Ke Keiki – A beloved child is a lei never forgotten.

Ola nā iwi – “the bones live” – is a proverb referring to respected elders who are well-cared for by their families. The life ways of our people are preserved by the kūpuna, and it is our keiki who will perpetuate them and pass them on to succeeding generations. Tonight’s Hō‘ike celebrates the natural and celestial forces that create life. The joys of motherhood, the rewards of fatherhood, the reverence for elders, and the pride and promise of youth inspire ‘ohana each and every day to succeed and thrive in our Hawai‘i homeland, and in the greater world.

Mahalo to all of you who participated in our Instagram photo challenge and submitted pictures with your take on this year's theme!

Here is a selection of the photos you shared:

@bubsmama808
To view and share more photos related to the Song Contest, use the hashtag #kssong on Instagram.