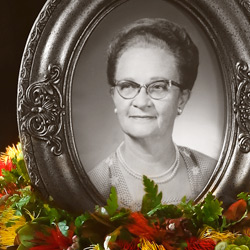 In 2014, the Kamehameha Kapālama High School and Choral Department were gifted by Dr. Michael and Bina Chun, a chest of music belonging to Bina’s grandmother and the prolific composer – Bina Mossman. The chest was filled with dozens of Aunty Bina’s original compositions, sheet music, lyrical notes and choral arrangements.

Independent, strong, and servant leader are just a few words that come to mind when thinking about Bina Mossman. As an influential and progressive Hawaiian woman of her time, Aunty Bina is best known for her musical and political contributions to Hawai‘i. Born the year the Hawaiian monarchy was overthrown and during an era where song fests and glee clubs were still inspired by Hawaiian royalty, Bina Mossman was the first person to create an all-Hawaiian girls glee club. Mentored by Queen Lili‘uokalani, the elegant Bina Mossman Women’s Glee Club would entertain throughout Hawai‘i and abroad. As a champion for women and children rights, Bina Mossman’s political career spans various prominent positions in the Territorial Legislature, the Hawaiian Homes Commission, the Republican National Committeewoman of Hawai‘i and local Hawaiian Civic Clubs. With a lifetime devoted to Hawaiian music some of Aunty Bina’s best known songs include, “Niu Haohao,” “He Ono,” and “Stevedore Hula”.

To celebrate the extraordinary life and rich musical heritage of one of Hawai‘i’s pillars of Hawaiian music, we honor the music of Bina Mossman in the Kamehameha Schools 97th Annual Song Contest.

"“I really want to give back to my community here at home, and to make a difference in our Hawaiian community especially. This song has helped me realize that.”"

"I actually started loving Song Contest way before I started to go to school here."

"To be able to participate in this tradition allows us to perpetuate Hawaiian culture and also connect to it as well."

“In Song Contest we learn about mele. To me, mele is one of the most important aspects in Hawaiian culture, because it allows you express a lot of emotions and feelings.”

"Song Contest is a way for us to learn about who we are as Hawaiians and for us to be a part of this legacy for all that come after us."

"The cultural aspect that I connect with Song Contest is the idea of mele, and that tradition of carrying on who we are as Hawaiian people, through the songs."

“What impresses me the most about Song Contest is that every year it’s a new theme, maybe repeating music, but it’s always about bringing our culture back to life.”

"This impacts me because it really gets me on my toes. Because when you’re a (Song Contest) leader, you don’t have any excuses. You have to just do your job the best that you can."

"When it comes to being a director, I wouldn’t necessarily call it leading them (my classmates). I’d moreso like to call it serving them."

"Being a leader at Song Contest causes me to think how I can be a leader not only on the stage, but off the stage. And that has really pushed me to be the best possible person I can." 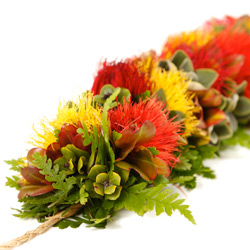 George Alanson Andrus Cup is awarded to the winner of the men's competition.

New England Mother's Cup is awarded to the winner of the women's competition.