Mahalo to our sponsors: 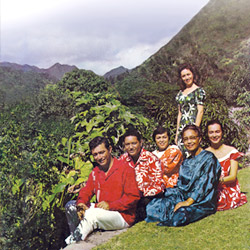 For some families, music is light entertainment. A radio may play softly in the background during dinner or Sunday chores, and the instruments get dusted off monthly at a backyard pā‘ina. But for others, music is an absolute necessity — a daily ritual. It is history and storytelling. It is expression. It is joy, sadness, pain, comfort, healing. It is land and it is people. It is life. Such was the case for Victoria Keali‘ika‘apunihonua Ii Rodrigues.

Born in 1912 to a deeply musical ‘ohana of talented singers and composers, Aunty Vickie was groomed to master her craft with training beginning at the age of three. Raised by paternal grandparents James Kaihiihikapuokalani Ii and Katherine Lahilahi Stevens Ii, she was carefully taught the songs of Hawai‘i — their lyrics, meanings, composers, and backstories. Whichever family member was teaching her would sing a song three times through. The fourth time, she would join in. By the fifth, the young Vickie would sing alone, an entire song freshly committed to memory and tested for perfection.

Many of the songs taught to Aunty Vickie were classics, well known and often enjoyed by the masses. A good number of them, however, were private family songs — personal accounts of equally personal events that, up until that point, were practically unknown to the general public. With a highly refined memory as her lone tool, Aunty Vickie became a walking repository of song and history and an invaluable resource for lovers of Hawaiian music. It wasn’t until 1949, at the encouragement of a dear friend, that Aunty Vickie began writing down the words and music to these songs so that they would not be lost to her children. In so doing, she created an incomparable archive of mele and saved a number of beloved ancestral treasures from near extinction.

Aunty Vickie’s contributions to Hawaiian music and the community at large as a composer, musician, singer, choreographer, teacher, and translator are immeasurable and her impact long-lasting. Dear friend and Hawaiian historian Jean Kini Sullivan writes:

“And when Vickie Ii Rodrigues sings, you instantly know what Hawaiian music really is … There is no mistaking Vickie’s hand on a guitar, her voice in a song, her style in a hula, her speech in conversation, her very presence in a gathering. When this electrifying lady turns on, so does everyone else. You can almost hear the wicked twinkle in her eye.”

George Alanson Andrus Cup is awarded to the winner of the men's competition.

New England Mother's Cup is awarded to the winner of the women's competition.

A group of Kamehameha Schools Kapālama students recently took a collection of original songs to the worldwide stage, bringing their talent to life through an innovative music compilation project. The result was a 17-track album titled “Untold” created solely by students, from performances to production.

The “Untold” CD is available for purchase at Kamehameha Schools Kapālama campus bookstore, as well as through musictech.hearnow.com. “Untold” is also available to stream on iTunes, Apple Music, Spotify, Pandora, YouTube and Amazon.

Revenue from the sales of the CD will support future projects like this one undertaken by KS Kapālama’s Music and Technology class.